I learned of a very tragic story today. I often see sad tales of animal abuse that move me to tears, but this one struck me more deeply than most.

Mary, a 12 year emu who had found refuge from the evils of mankind at Rikki’s Refuge in Orange County, Virginia, was brutally murdered as she awaited her breakfast from a caring caretaker.

According to news reports, a staff member had temporarily stepped away from her pen, and in the short time of the caretaker’s absence, a trespasser shot Mary and killed her. The layout of the animal sanctuary is such that the shooting most definitely was an intentional act and not an accidental stray bullet.

There was no way that this animal could have caused anyone to feel rage or anger. This was not an emotional outburst. It was a callous and shallow act that likely humored an ignorant individual lacking empathy and emotional accord with other living beings.

We live in a society that has an increasing number of people like this, and it is terrifying.

We know what causes it. There is a whole litany of cultural influences that feed this sort of shallow callous monster that we have created. Yet our own wants and desires prevent us from looking honestly at what could change things. This really saddens me.

My hope is that, someday, my heart will have less reason to cry.

Please share this message far and wide. Any help we can get to the folks at Rikki’s Refuge is welcome. They are a great organization and do wonders with rescuing animals of all kinds.

Thank you, Rikki’s Refuge, for all that you do on behalf of animals. RIP sweet Mary.

The artwork for the Okey’s Promise: Celebrating the Human – Animal Bond Project has been complete for some time now, but we were waiting for the right time to begin sharing it with the public.

I have been working with the Domestic Violence Project, Inc. to plan some events in conjunction with their 35th Anniversary year celebrations, and we are looking forward to making a strong impact on the community.

Our first event will be tomorrow, May 3, 2013 during the First Friday celebrations in downtown Canton, OH’s Arts District. We are also planning exhibits at the Massillon Museum, Malone University, and other locations throughout the Stark County Community. Stay tuned!

If you are in Canton tomorrow, I hope you will join us. The weather is predicted to be fabulous! Here are the particulars:

An artistic celebration of animal rescue volunteers and domestic violence advocates coming together for mutual benefit of the community.

Time: 6:00pm until 9:00pm
Location: At the “Safe Animals Safe Kids” mural, hanging on the side of the Imperial Room at 4th St. NW and Court Ave. in Downtown Canton.

Artist BZTAT will exhibit her latest Okey’s Promise public art project, an exhibit of 9 artworks highlighting the connections between animal abuse, child abuse and domestic violence, with guests from the Domestic Violence Project, Inc. and local animal rescue groups. The artworks are positive and uplifting, showing the faces of children and companion pets who have triumphed over adversity. At risk youth and women affected by domestic violence contributed to the backgrounds of the artworks. The project was funded by a grant from ArtsInStark and private donations through crowdfunding efforts.

Rescue groups include: Peace for Pets, Friends of Stark Pound, Second Chance for Animals, Rose’s Rescue, and others. Pets available for adoption will be present!

Want to know more about the Okey’s Promise: Celebrating the Human – Animal Bond Project? Read more here, and watch the video below that was created for the fundraising campaign. 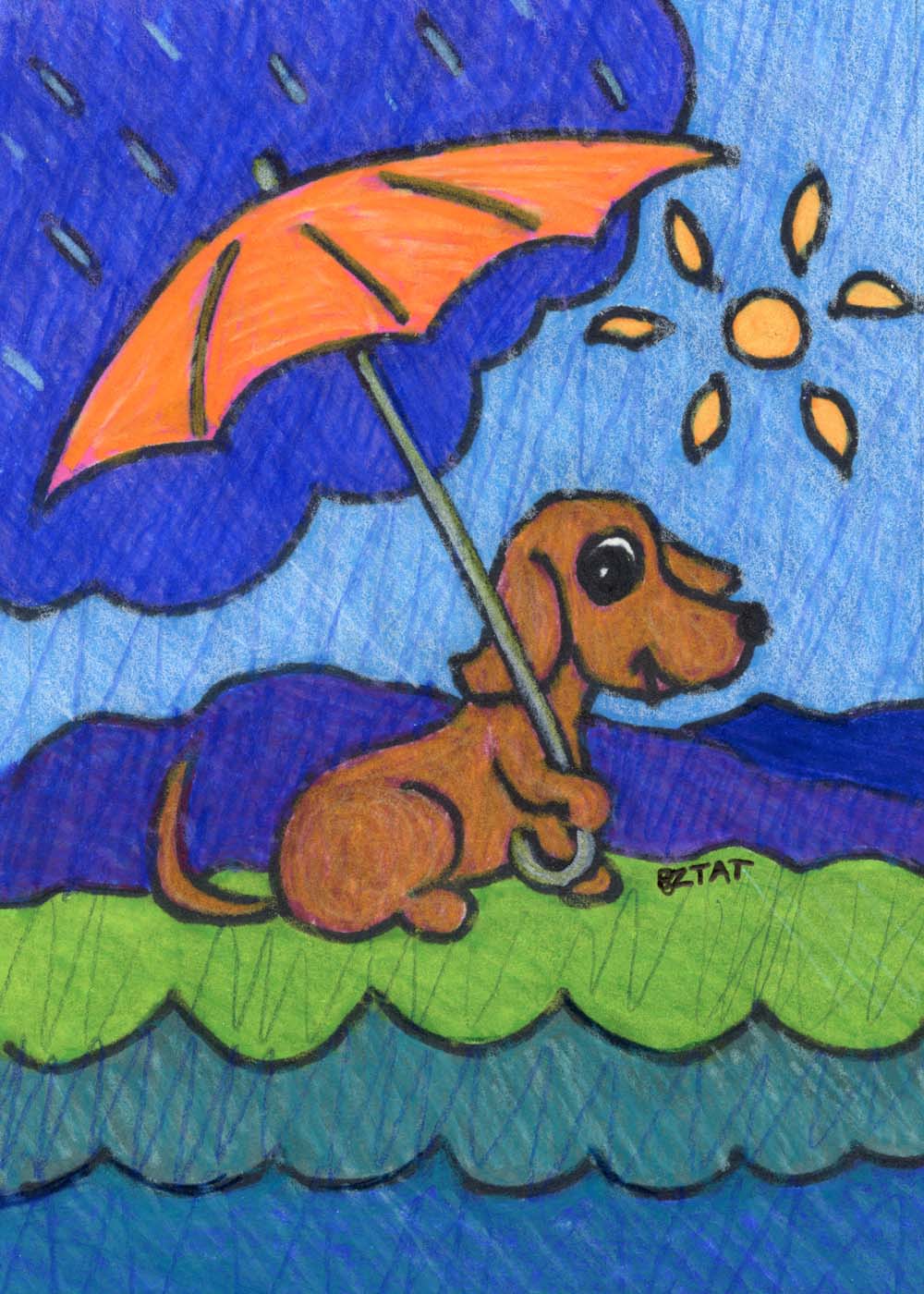 Wherever there are people, there are pets. We are a species that attracts, and is attracted to, animals whose own species have evolved through adapting to human interaction.

Even when certain dogs and cats and other companion animals are not socialized to humans, their overall species has adapted to us, and therefore, they rely on us for their survival. That is why there are growing efforts to address the needs of homeless pets who live off the discards of humanity and lurk on the fringes of our lives.

Humanity created their situation. They did not.

It amazes me to see people working to resolve the problem of homeless pets in their local communities. When someone travels to another side of the world to do it, well, that is just incredible.

Molly Mednikow did that.

Not only did she do that, she walked away from a thriving career in Atlanta, GA and started the charity Amazon Community Animal Rescue, Education and Safety (Amazon CARES) in the Peruvian Amazon. On her first trip to the region, she was struck by the awareness that numerous worldwide organizations were working on environmental issues affecting the Amazon, but there was no effort to address the needs of homeless domestic animals. “One could not walk three feet without stepping over a severely ill dog, lacking hope or opportunity in this environment,” she said. The experience compelled her to act.

Amazon CARES has since received international acclaim for its innovation and essential work to aid sick and injured animals, promote spay-neuter programs, and reduce the abuse and neglect of companion animals. Their programs aim to improve community health through working with both the animals and human beings in the region.

It is a daunting task. The concept of animal welfare is not as established in this society as it is in American culture, thus educating citizens about the importance of animal care is a big job.

The volunteers of Amazon CARES have made considerable progress in a few short years. Recently, though, they have faced serious setbacks. The Peruvian Amazon region has been experiencing the worst flooding in decades. The shelter in which they had housed sick animals and tended to their veterinary needs was washed away in the floods. The animals were rescued, but they are now in cramped quarters.

The Fondation 30 millions d’Amis has provided them with an emergency grant, and they have received generous donations from private donors. This has enabled them to build a smaller, emergency shelter on higher land. Local government is donating wood to assist with the project. More donations are needed, though. You can learn more here, and you can contribute to the fund raising campaign with the widget below.

The picture above is one that I drew to encourage hope amidst the losses facing Amazon CARES. Indeed, hope is what they are all about. Their work is so inspiring. I wish them well as they work to recover from the setbacks and continue the marvelous work they do – for the animals and for the people of Peru.

I and other animal welfare advocates have been appearing at Canton, OH City Council meetings for a couple of months now, speaking on behalf of feral cats in the city.

We are trying to overturn a city run Animal Control program that saw 353 feral cats euthanized in 2011, most of which were only destroyed due to being unadoptable. It is a very draconian program that incentivizes the Animal Control Officer to trap a large number of feral cats and wild animals whose lives are ended needlessly.

Advocates have captured the attention of Canton City Council and the Mayor’s administration. After weeks of contentious debate, Council finally passed a resolution to form a TNR exploratory committee, bringing citizens and government officials together to study the issue and recommend a program. The Stark County Humane Society has decided to cease their contract with the city to euthanize feral cats beginning April 30, 2012. This is progress!

The city remains contracted with the Animal Control Officer whose record has prompted so much outrage in the community. His role will be minimized, and eventually eliminated, however, if an effective TNR program can be developed.

This sort of community effort will require a lot of work. Bringing together  community leaders and volunteers from diverse perspectives has its challenges, but I am hopeful that a positive outcome is imminent.

As I have engaged in the process, a question keeps being asked. Why are the cats so important when there are so many other issues of importance to the community?

For a dedicated animal and cat lover like me, the answer is easy. But to people less connected to animals, they do not see how intertwined pet ownership is to the majority of citizens in every community across America. For them, I have one word for explanation.

When Hurricane Katrina struck in 2005, Americans became acutely aware of how deeply embedded pets are in our lives and in our culture. Never before had it been made so clear that human beings will inevitably take risks to their own safety in order to save their pets. Rather than seek their own safety, residents of New Orleans and other cities refused to evacuate because they could not take their animals with them. Some lost their lives as a result, as did their pets.

Even if you do not care about animals yourself, you have to realize that other people do. Minimizing the value of animal life minimizes the depth of an animal lover’s emotional connection to animals. A lack of concern for animal welfare touches off some very deep emotions for people, and it will ALWAYS be met with hostility.

In addition to that, the way we treat animals, particularly domestic ones whose DNA has been purposely adapted for human purposes, is indicative of how we treat the needs of any living being. When the needs of animals are minimized or neglected, our arrogance leads to a disregard of other vulnerable beings in our culture.

The purpose of this blog is to bring about awareness to the connections between animal abuse and the abuse of vulnerable human beings. The needless slaughter of feral cats when there are better ways to manage them IS ANIMAL ABUSE. I cannot sit quietly by and let this happen in my own community.

I have been asked to participate in the Canton City Council TNR exploratory committee. I will do so with pride, and I will post updates here about the process.

What is happening in Canton is the status quo for Animal Control in the United States. My hope is that I can promote change both within and beyond my community.

Will you join me in that process? What is happening in your community, and what can you do to bring about positive change?